By Jake FreivaldFebruary 4, 2020 No Comments 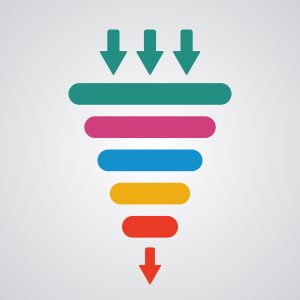 Let’s buck a trend in marketing and stop talking about the buyer’s journey.

Don’t get me wrong: I’m not bashing it. It’s a holistic approach that focuses on the buyer’s process rather than any internal processes, and that buyer-centric approach is really beneficial.

But salespeople tend to focus on the sales funnel. And to give credit where it’s due, that also makes sense: There’s not much they can do until the prospect gets into the funnel.

For marketers to be good partners to sales, they need to understand how they’re affecting the sales funnel – even if their view encompasses the broader journey.

It’s really important for marketers to grasp that fact and incorporate it into their thinking about the buyer’s journey.

The buyer’s journey starts well before the sales funnel, during the buyer’s education phase. Marketers create pre-funnel thought leadership content to boost awareness and draw buyers in. Based on the personas they’re targeting, they often deploy buzzwords and broad ideas in the hope of being specific enough for the persona, while casting a wide enough net to grab a bunch of leads.

And they’re often shooting themselves in the foot.

I’ll bet you’ve personally read tens of thousands of words and watched hours of videos on these topics in the last few months, all of it under the guise of thought leadership.

How many of them left you understanding something unique about the issue? Something that you hadn’t considered as a problem, and that could be specifically solved by the company that created the content? How many concepts do you remember because you found out that a specific company addressed them? And do you remember the name of that company?

Some companies – megavendors and the largest consulting firms – want to eat the whole enchilada on a major IoT project. If your company is something smaller than that – a software vendor that specializes in high-scale streaming analytics for the IoT, for instance – then you are a part of the solution.

If you try to create buzzword-compliant thought leadership that describes the entire problem, you’ll waste time talking about things that are important, but outside your scope. You’ll be educating on behalf of the megavendors.

And using a broader scope has implications for your sales funnel:

Consider the difference between these titles:

In the first case, your salespeople have to be ready for anything analytics-related.

In the second, they might discuss marrying up Kafka and AI.

In the third, the conversation could easily move to master data management, graph databases, or other similar topics.

(This isn’t an excuse to talk about your solution in education-phase content, by the way. You’re still supposed to be developing thought leadership, not a product pitch.)

More than anything else, thought leadership at this phase needs to raise questions. But they need to be about things that will drive people to consider the importance of your type of solution.

For instance, you can create high-throughput pre-funnel thought leadership by making them ask:

In general, I appreciate content at this phase that has a single purpose, and is concise and visual. I want some of it to be ungated. I like it narrowly focused, as long as it’s focused for the right reasons.

So why don’t we, as marketers, narrow our focus when we should? There are a lot of answers:

That last one is really important for sales/marketing alignment. Salespeople think they want more leads, and we’re under tremendous pressure to deliver them. You need to articulate to them why more focused content is better for them, and not just for you.

Yes, focusing your high-level, pre-funnel thought leadership on what you sell might not appeal to as many people. That’s okay: You’re not targeting just anyone. You’re targeting the people who are most likely to want good conversations with your salespeople.

And that increases funnel throughput before the prospective client even gets into your funnel.

Next week, we’ll talk about thought leadership content that maximizes sales funnel throughput when the consumer finally enters the funnel – the solution phase. Join us!

Related: Five steps to a content strategy in the new year

Advance your business in real-time